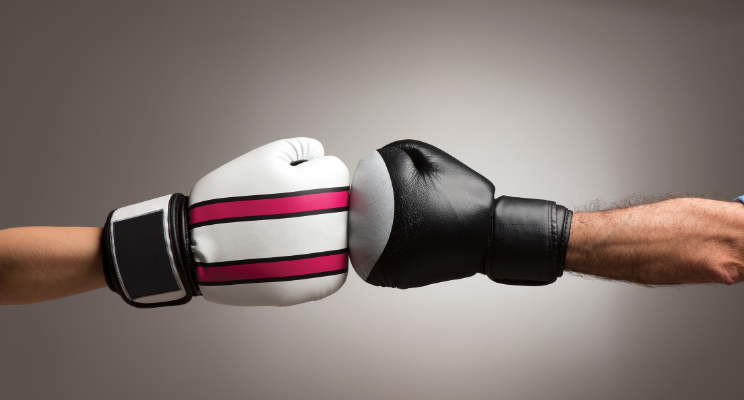 The underlying processes responsible for antagonistic behaviors between different groups have been split into a number of potential theories, as shown by Robert Böhm et al. Of the numerous theories presented, two notable approaches are realistic group conflict theory and social identity theory.

Realistic group conflict theory emphasizes that intergroup relations are dependent on the resources available between two or more groups, along with the level of competition necessary to acquire these resources. A famous example of this theory was conducted by Sherif et al. in their “Robber’s Cave experiment”. Two groups of boys were formed without the knowledge of the other’s existence. Once they became aware of the outgroup’s presence, they were forced to compete for resources. When this competition was set into place, the two groups became extremely hostile towards one another, and this was only reversed when the two groups were given a common goal that required them to work together.

On the other hand, social identity theory states that the mere establishment of groups alone can lead to intergroup hostility, and the presence of competition for resources is not necessary. In Marilynn Brewer’s review article, she highlights experiments using a ‘minimal group paradigm’, meaning the groups formed were based on trivial and meaningless characteristics, such as painting preferences. The researchers found that simply being a part of a group led to ingroup biases, showing participants were willing to maximize benefits for individuals within their own group at the expense of outgroup members. The theories of intergroup conflict presented show that hostility between two groups can be attributed to different variables. However, a common element found in these theories is that separation into different groups seems to cause a rift between individuals, leading to a higher probability of dissension.

Intragroup conflict can be divided into two subsections: task conflict and relationship conflict.

According to Francisco J. Medina et al. Task conflict refers to disagreement regarding quality of work submissions, resource allocation, or the requirements for completing a task.

Relationship conflict is due to incompatibility between two or more people, and can arise through differing personal tastes, contrasting sets of values, etc.

Although within group conflict is often frowned upon, research has shown that the type of conflict being experienced has different effects on group performance. Medina and his colleagues presented research indicating that relationship conflict was negatively associated with work climate and employee satisfaction. Contrastingly, task conflict was associated with fostering an innovative environment, leading to the promotion of quality and constructive debate. However, these findings do not define all levels of task conflict, considering high task conflict can still breed stress and lead to a decrease in satisfaction.

The combined findings of intergroup and intragroup conflict provide us with an understanding of how different forms of disagreements between groups and within groups may arise. By keeping this information in mind, we can label the forms of conflict we are experiencing in our lives and take the necessary steps in order to mediate our disputes. Now that we can successfully identify the forms of conflict, let’s see how we can use conflict resolution strategies to appease contention.

According to the Thomas Kilmann Model, there exists 5 approaches to conflict resolution. These approaches include the following: avoidance, accommodation, compromise, competition, and collaboration.  The 5 approaches range in levels of the individual’s attempt to satisfy personal concerns (assertiveness), and their attempt to satisfy the concerns of others (cooperativeness). For example, avoidance would be classified as both unassertive and uncooperative, as neither the individual’s needs nor the needs of the ‘other’ are being met.

The effectiveness of each strategy ranges in mediating contention. Liat Kulik and her colleagues studied the spousal conflict resolution strategies in late adulthood couples while additionally examining marital quality. They found that high use of integration in marriage, meaning taking cooperativeness over assertiveness into account when making decisions, were highly correlated with positive marital quality. Therefore, positive assessments of marital quality were associated with collaborative efforts between both partners to resolve spousal conflicts, while avoiding over-assertion and attempting to establish dominance over one another.

Samuel O. Salami reached similar conclusions when conducting research on 320 public servants. They found a negative association between forcing/withdrawing strategies and the level of commitment the participants had to their current organization/company. This meant that individuals eliciting or experiencing avoidance or overly assertive conflict resolution strategies in the workplace were less likely to feel committed to the establishment. Alternatively, they found that compromise and direct confrontation to positively predict commitment to an individual’s organization.

An interesting finding also obtained by Samuel O. Salami was that emotional intelligence was a moderating factor in conflict resolution strategies and organizational commitment. This indicates that participants rated having higher levels of trait emotional intelligence had more effective conflict resolution strategies that predicted higher levels of company commitment.

Conflict resolution strategies range in effectiveness, and taking the aforementioned studies into account, it is clear that focusing on cooperation and compromise can lead to beneficial settlements for both parties involved. These strategies can be learned and honed using the different missions available on the LIFE Intelligence app, a comprehensive guide to your self, career, and relationships.

How LIFE Intelligence helps with conflict resolution and relationship skills

The LIFE Intelligence app is a valuable tool in understanding the importance of conflict resolution and acquiring the knowledge necessary to use these skills. It covers 9 topics, or "Missions," covering everything from managing stress and anxiety, to work productivity, to leadership.

Mission 8 teaches us about how to use conflict productively and for relationship development. Mission 8.1 informs us that although conflict can be detrimental to our relationships but can also show that you care enough to express your feelings towards the person. In addition, it is important to gain emotional clarity and avoid criticism, contempt, stonewalling, and defensiveness when amidst conflict.

The LIFE Intelligence app allows us to understand why we choose the conflict resolution styles that we do, while also teaching us the proper ways to approach life’s difficulties and social struggles. Quality conflict resolution strategies are not only necessary to resolve disputes, but also to improve overall quality of life. By using effective communication and cooperative approaches, disagreements can be mediated productively and swiftly, resulting in relationship development in the process.